The world’s first use of Thermo Swing Wall Insulation Technology (TSWIN) makes the 2.8-liter 1GD-FTV engine one of the most thermally efficient in existence, with a maximum thermal efficiency of 44 percent. Despite smaller engine displacement in comparison to the current KD engine, maximum torque is improved by 25 percent and low speed torque improved by 11 percent, while fuel efficiency has received a 15 percent boost.

The engines also have Toyota’s first-ever urea Selective Catalytic Reduction (SCR)6 system that can eliminate up to 99 percent of emissions of NOx (nitrogen oxide), one of the main causes of air pollution.

The newly developed 1GD-FTV is currently available in the new Hilux small pickup truck launched in Thailand in May 2015, and in the partially redesigned Land Cruiser Prado launched in Japan on June 17. The same engine lineup includes the 2GD-FTV 2.4-liter direct-injection turbo diesel engine.

Features of the new GD engines

The new engines have proven their high thermal efficiency, quiet operation, and powerful performance around the world, including extremely cold areas where air temperatures can fall to -40˚C and altitudes exceeding 4,500 meters above sea level.

By adjacent positioning of the catalyst for cleaner performance and other improvements, catalyst size has been reduced by roughly 30 percent and number of exhaust system layouts reduced from 18 to just three, vastly simplifying the global deployment process and lessening the environmental burden.

Thanks to the world-first use of Thermo Swing Wall Insulation Technology and the use of silica-reinforced porous anodized aluminum (SiRPA) on the pistons, cooling loss during combustion is reduced by approximately 30 percent. SiRPA is a high insulation and dissipation material that is easy to heat and easy to cool.

Precise pilot injection matching the state of the ambient air occurs before the main injection to shorten ignition delay, achieving stable combustion even in the world’s harshest environments, while ensuring quiet operation and high thermal efficiency.

The new turbocharger used by the GD engines is 30 percent smaller than its current equivalent, and features a newly developed turbine that improves efficiency, and a newly developed impeller that provides instantaneous acceleration response and produces maximum torque over a wide range of RPM.

Use of Toyota’s proprietary, compact, high-dispersion urea selective catalyst reduction system eliminates up to 99 percent of emissions of NOx (nitrogen oxide), one of the main causes of air pollution. This will help vehicles conform to Euro 6 and the 2010 emissions standards set by Japan’s Ministry of Land, Infrastructure and Transport.

The current globally deployed KD engines will be gradually phased out and replaced with GD engines. By 2016, production will reach approximately 700,000 units a year with introduction in approximately 90 markets, set to expand to at least 150 markets by 2020.

Toyota will continue to position diesel engines as a key component of the Toyota engine lineup, based on the philosophy of providing the right vehicles for the right places at the right time. The entire Toyota group, including Toyota Industries Corporation, will combine its energies to develop cleaner and more competitive diesel engines across a wide-range of vehicle types, taking into account the varying needs of people around the world. 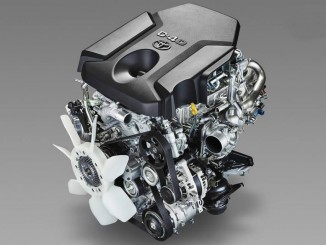